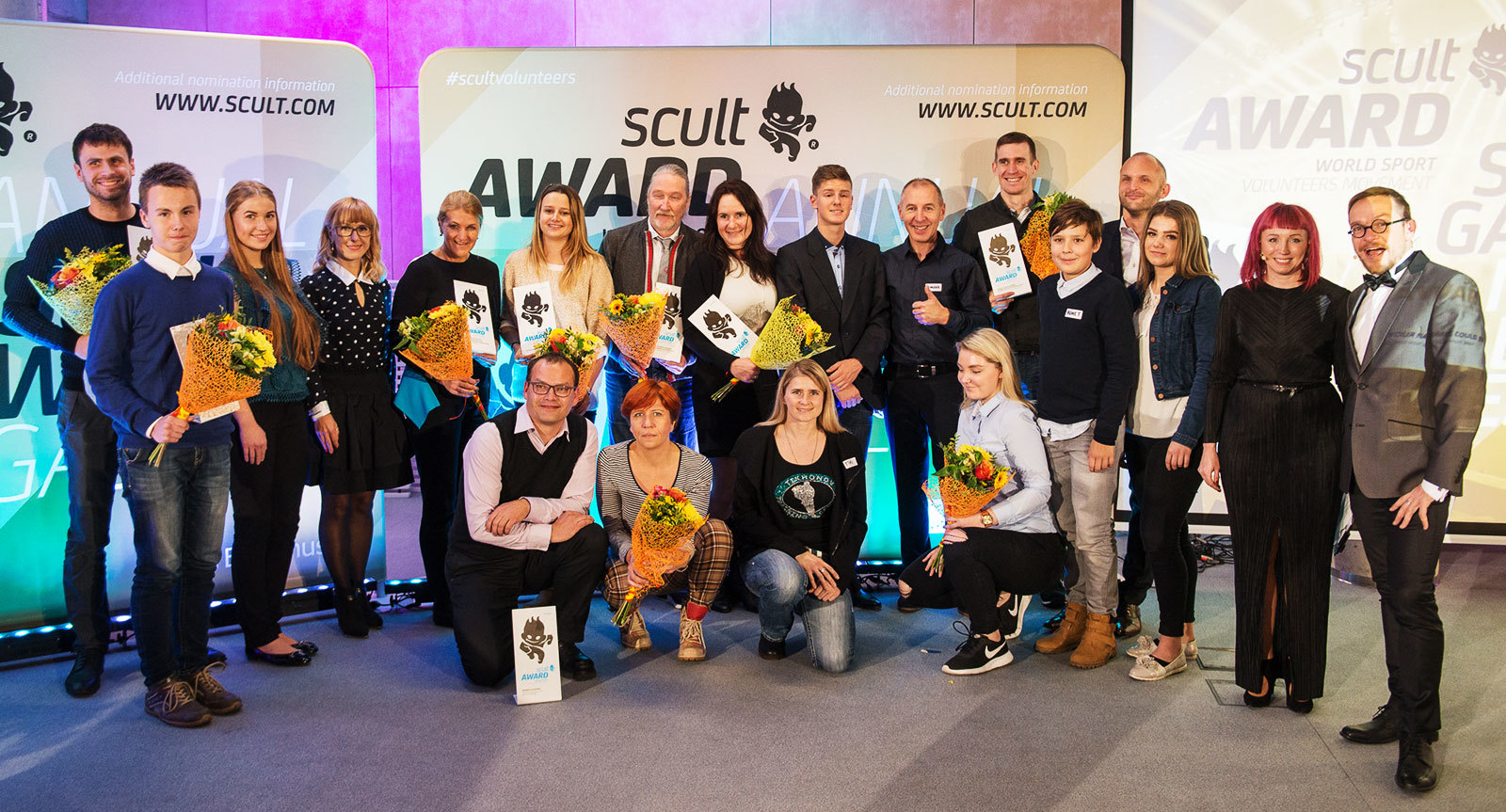 SCULT WORLD SPORT VOLUNTEER OF THE YEAR - OLIVIA MARGAIN
Our world volunteer of the year is – as one might expect – extremely passionate about sports. She's been involved with sports since she was a kid, and is now working as a rhythmic gymnastics coach for young people. Besides working as head coach and department manager in her sports club, she is also there when help is needed for sport volunteering.

SCULT WORLD SPORT ORGANISER OF THE YEAR - SPECIAL OLYMPICS WINTER GAMES AUSTRIA 2017
The 2017 Special Olympics World Winter Games were held in Austria this spring. 3000 volunteers from all over the world gathered to Graz, Schadming and Ramsau to make the winter games an unforgettable event for 2700 athletes with intellectual disabilites. Without the support of volunteers the games couldn't have been as successful as they were.
Next to the sports program, there were also programs for health, education, inclusion, culture and art and much more. None of these programs would have come to be without the support of volunteers.

SCULT CRAZY AWARD - HERO THE HEDGEHOG (IAAF World Championships London 2017)
Crazy Award – for being so funny. Hero was designed by a nine-year-old Ellie from the West Midlands, who won a competition run by Blue Peter to find an official mascot for the championships. From tumbling down stairs to zooming along on a zipwire and playing pranks on Usain Bolt, Hero was an absolute show-stealer, who instantly became a crowd favourite. The spiky sporty superstar delighted the crowds at the World Athletics Championships.

ESTONIAN SPORT VOLUNTEER OF THE YEAR – ANDRES TINKUS
Andres is a sheer example of a sport volunteer dedicated to the soul. He has been a member of Pärnu Kahe Silla Klubi (a sports club in Pärnu) for more than 10 years. Teammates describe Andres as an emphatic companion who respects quality humor and an active lifestyle. Andres is a Master in Logistics Management. He applies his professional knowledge not only in the field of aviation, but also for the development of sports.
He is a great team player who thrives at solving critical situations with a touch of good humor and a pragmatic approach.

ESTONIAN YOUNG SPORT VOLUNTEER OF THE YEAR – SIIM MÜHLBERG
Siim is an enthusiastic young volunteer, whose upbeat nature inspires people around him. At the age of just 14, he manages to connect with adults, solve problems on the spot and administer significant parts of sports events. This year he was assigned the role of "track team leader", which he handled like a pro. His energetic attitude comes from the will in his heart to keep popularising sports.

ESTONIAN INSPIRATOR AND ENGAGEMENT MENTOR FOR VOLUNTEERS – ANDRES LILLEMÄGI
Andres is a teacher in Vaeküla school (a school for students with special needs) and the head of the local boy scouts' union. He has inspired many of his students and graduates to volunteer at different sports events in Lääne-Virumaa, giving them an idea of the importence of volunteer work. In addition to his own students, Andres has also involved kids from other places through the scouts' union. Many of his alumni have carried on with volunteering after their graduation.

ESTONIAN INVOLVER OF VOLUNTEERS – ÜLENURME GYMNASIUM VOLUNTEER GROUP
In the last few years, a group of eager young fellows has emerged in Ülenurme. The group has continuously offered to help out at different sports events in the area, doing it out of their own free will and time. By setting a great example, they been an inspiration for many of their schoolmates. The group was also deeply recognised by the committee of Pierre de Coubertin youth forum, saying they had never seen such levels of activity and helpfulness at their previous events.

ESTONIAN SPORT VOLUNTEERS' FRIEND OF THE YEAR – RAILI HOLLO
Raili is a youth worker at Tähe Noorteklubi (a youth club) in Tartu. She has been engaging young people of very different backgrounds, some of them from difficult families or with special needs. For the last 3 years, she has been administering a volunteer unit of Klubi Tartu Maraton. Her work there has been impeccable. Her kindness, level-headedness and excellent leadership qualities have been essential in motivating her squad to act in unity and come together, time and time again.

ESTONIAN SPORT VOLUNTEER OF THE YEAR – SPECIAL PRIZE: WORLD ORIENTEERING CHAMPIONSHIPS 2017 in TARTU
In the case of WOC2017 it was clear from the very beginning: there wasn't going to be a standard approach for organising the competition. The main reason being a lack of precedent – WOC2017 was an extremely important, yet still a one-off event. Nonetheless, every aspect of the undertaking was very well thought out. The involvement and engagement of volunteers was exceptionally well executed.
Numbers: The championships were broadcasted on TV screens of 139 countries. Competitors came from 50 different countries. The organizers involved around 500 volunteers of 20 different nationalities. The championships saw more than 1000 spectators, most of whom came from abroad.

This blog post was written as part of the Erasmus+ Sport Project "Internationalization of the Sport Volunteers Movement SCULT.com", co-funded by the Erasmus+ programme of the European Union.